Wolfberger is reinventing tradition with a new range of bitters: rich, fragrant, one-of-a-kind!

WOLFBERGER IS REINVENTING TRADITION WITH ITS NEW RANGE OF BITTERS, THE AMERS FLEUR DE BIERE®

The prime example of an Alsatian aperitif, Amer Bière or bitters-flavoured beer, elevates a simple beer’s taste and expression with subtle, original savours. Driven by the desire to make the most of the classic bitters and to offer natural products, Wolfberger has reinvented the tradition with a new range of bitters – rich, fragrant, one-of-a-kind. In keeping with current trends and hoping to win over fans of specialty beers, Wolfberger’s  Amers Fleur de Bière® have a new image, new bottle and a modern label featuring the fruit that flavours the beer. The Amers Fleur de Bière® are inimitable craft creations made from distilled farmhouse ales and an infusion of bitter barks or rinds to enhance the natural flavours.

Wolfberger has, until now, followed the “traditional” method of creating bitters, using alcohol, caramel, an infusion of plants and sugar syrup. Wanting to offer Amers crafts, 100% natural, without colouring agents or other additives, and made of ingredients primarily elaborated in our distillery, Wolfberger is today reinventing how to drink an Amer Bière, more modern and far more fun. The Amers usually contain a bittering agent from plants, such as gentian root or cinchona bark which gives us quinine. While gentian root has been a long-time ingredient of Wolfberger Amers, our master distiller from Colmar has today chosen to use exclusively the cinchona bark as the bittering agent in his recipes.

Historically, the main characteristic of quinine is found in the bark that contains quinine alkaloids, namely quinine and quinidine. These ingredients are appreciated for their gustative virtues, for their delicate bitterness and suave character – more delicate and feminine – which develop the rising flavours.

Another distinctive feature of Amers Fleur de Bière® is that they elegantly combine an eau-de-vie and beer, a landmark creation from the Winery made by macerating lemon peel. The addition of our finest alcohol flavour enhancers is the signature of this new range of unique tastes.

Making Amers Fleur de Bière® requires both the distiller’s know-how as well as the liquorist’s savoir-faire. The bitters are made in three phases:

1- MAKING THE EAU-DE-VIE FROM BEER

The primary ingredient in any spirit is a mash of unpasteurized, unfiltered beer – essentially hops and a wort. This farmhouse beer is distilled in a traditional copper still using the double-pass method, a process which enhances the beer’s remarkable spirit. During the first pass, the farmhouse beer is distilled for three to five hours. The resulting brouillis is the link between the two stills, in continuous flow. Then comes the second pass, which lasts three hours. During the distillation of the eaux-de-vie, the “tails” are added to the next brouillis while the “heads,” rougher and less refined, are eliminated.

Only the “hearts” of the brandies, which run at around 65% alcohol volume content, are sent to a vat where they will age for 15 months minimum.

Making the lemon alcohol that is present in our Amers Fleur de Bière® rests on the same principle as making the eaux-de-vie. The primary ingredient in this brandy is the lemon peel. The peels macerate in the finest alcohol base before being distilled in a traditional copper still. This step reveals the true soul of the fruit, allowing it to express all its flavours.

The “heart” resulting from distillation is afterwards aged in order to promote the optimal intensity of flavours.

The final ingredient necessary to making our Amers Fleur de Bière® is the infusion of cinchona bark which provides the typical bitterness. This infusion is obtained after macerating cinchona bark in the finest alcohol for several months.

Beer brandy, the lemon alcohol and the infusion of cinchona are then assembled and added to other special ingredients (such as natural flavours or fruit juices) for each bitters, according to the Wolfberger recipes, which are naturally kept secret. The final product is then filtered and clarified for 48 hours before bottling.

Making the Amers Fleur de Bière® requires the distiller’s know-how for the essential ingredient in our recipe: beer brandy. This production also calls on the expertise of the liquorist who makes the different infusions necessary for the Wolfberger bitters, such as cinchona or quinine. 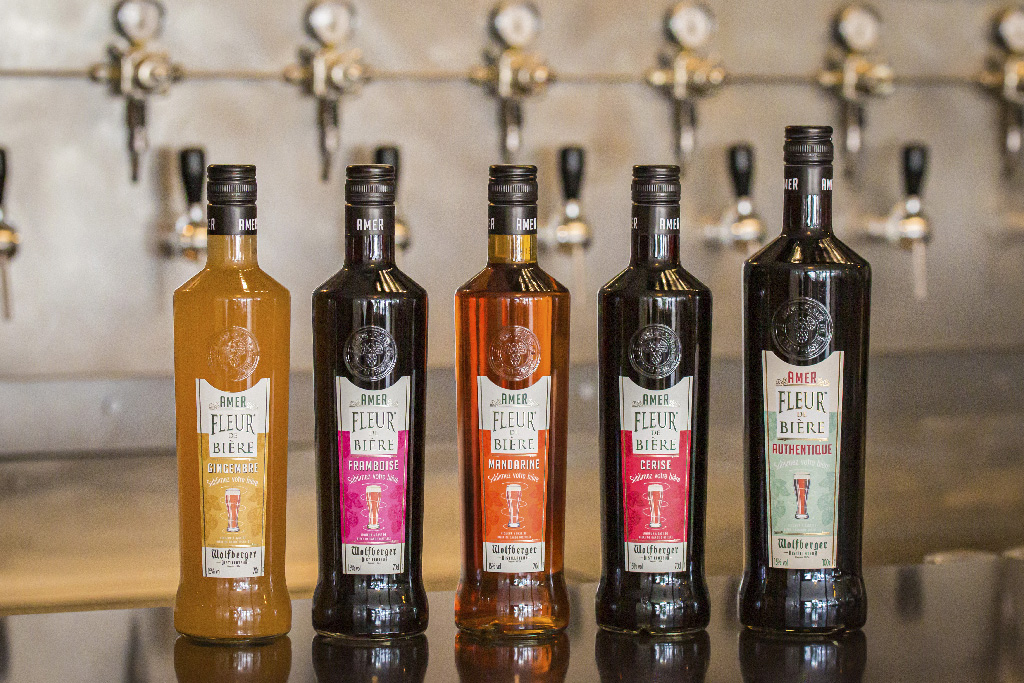 WHICH BITTERS WITH BEERS ?

Amer Fleur de Bière® Authentique : Amber-coloured, this Fleur de Bière bitters finds its character in citrus notes, spices and caramel. On the palate, the quinine infusion delicately and subtly glorifies the bitterness of the beer. The finish is lively, fresh and fruity.

Amer Fleur de Bière® Mandarine : With its characteristic yellow-orange colour, the Mandarin bitters provides intensely fresh notes of mandarin peel. On the palate, the quinine infusion and the fruit delicately contribute together to the bitterness. The finish is fruity, superbly crisp and vivacious.

Amer Fleur de Bière® Cerise : With the lovely red so characteristic of the fruit, the Cherry bitters offers a fruity aroma with the tart taste of sour cherry. On the palate, the cherry infusion brings the quinine to a delicate, acerbic fullness. The finish is fruity, superbly crisp and vivacious.

Amer Fleur de Bière® Gingembre : A pale golden yellow, the Ginger bitters presents a spicy aroma of lemon. On the palate, the infusion of quinine and ginger delicately contribute to the bitterness. The finish is fruity, superbly crisp and vivacious.

Amer Fleur de Bière® Framboise : Ruby-red, the Raspberry bitters contains notes of this delicate fruit. On the palate, the infusion of red berries and quinine contribute to the delicate bitterness. The finish is fruity, superbly crisp and vivacious.

Discover all our Wines and Spirits